Autism, also called Autism spectrum disorder (ASD), refers to a broad range of developmental disorders that impairs our ability to communicate and interact. Autism spectrum disorder impacts the nervous system and the range and severity of symptoms can vary widely. Common symptoms include difficulty with communication, difficulty with social interactions, obsessive interests, and repetitive behaviors.

What Are Signs Of Autism?

The signs and symptoms of ASD are unique to each individual and can range from mild to severe. Here are some of the more common early warning symptoms: 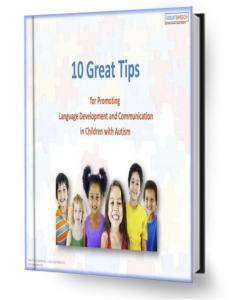 WHAT IS ASPERGER’S SYNDROME?

Asperger’s Syndrome refers to a type of pervasive developmental disorder involving atypical characteristics within the development of many basic skills, most notably the ability to socialize with others, communicate, and use imagination.

Children with Asperger’s syndrome tend to function at higher levels, have normal intelligence, and near normal speech development when compared to children with autism, though many develop problems with communicating, both verbally and non-verbally, as they grow older.

WHAT ARE SIGNS OF ASPERGER’S SYNDROME?

Like with all syndromes, symptoms of Asperger’s syndrome vary from individual to individual and can range from mild to severe. Common symptoms include:

ONLINE SPEECH THERAPY FOR SELF REGULATION

This program is designed to help tweens, teens and college students empower them to improve their communication skills.

How Can Great Speech Help?

Speech and nonverbal communication as well as social interaction are the most common problems for individuals diagnosed with ASD which is why speech-language therapy is a central part of treatment.

Speech therapy for individuals on the spectrum is designed to coordinate the mechanics of speech with the meaning and social use of language. Based on the results of our assessment, a specially trained Great Speech therapist, will set goals specifically designed to help your child communicate in the most functional and socially-appropriate way, including mastering spoken language or learning non-verbal communication skills.

Are you ready to begin online speech therapy? Click here to get started today!

This program is designed to help children and teens and college students develop essential pragmatic skills to become successful adults.

Learn more about how social communication is using language in a social context.

Are you ready to begin online speech therapy? Click here to get started today!

“Our Great Speech therapist was able to help my son tune into both verbal and nonverbal cues from other people. He now understands the importance of reading facial expressions and body language. This skill has helped him interact more appropriately both with family members and his peers.”