“Goo Goo Gaga” may not have a literal translation, but if your baby has uttered these sounds before, you’re probably wondering…what are they trying to say? Is there a way for me to tell?

Learn more about what your baby is trying to say, why they’re using “goo goo gaga”, if their babbling has actual meaning, and how you can help them as they babble away.

Babbling is loosely defined as the sounds a baby makes. There are many variants when it comes to what types of sounds and what age milestones your baby might make them.

Babbling is critical to language learning for babies, according to the Journal of Child Language. “By vocalizing, infants catalyze the production of simplified, more easily learnable language from caregivers.” Infants use their ambient language in everyday learning environments to bring new meaning when engaging with adults from their own sounds.

Why do babies say goo goo gaga? Does this mean my baby has started babbling?

Babbling is an important marker in childhood development and communication skills. Studies have determined that a baby’s sounds can be classified into two categories: involuntary and voluntary sounds.

Just like adults, infants produce involuntary sounds in the way of burps, coughs, grunts, and sighs within the first 2 months of life. These may be extremely cute, but wouldn’t be classified as babbling just yet.

When your child is between 1 to 4 months old, you can generally expect them to begin engaging in cooing, giggling, and laughing, especially when prompted in conversation with an adult or caregiver.

‘Marginal babbling’ occurs between 4 and 6 months of age — this is classified as the squealing and cooing sounds your baby makes, and a precursor to more pronounced babbling noises.

Babbling really begins when your child reaches 6 months of age. At this time, babies will make longer sounds that have more variety, complex tone and volume, and syllable variation. Your child has collected many sounds and noises from you and others around them.

The real ‘conversational babbling’ occurs around 9 months of age. This milestone may include pauses, rhythm, intonation, and more tonal variance with different babbles: “haha goo goo gaga la!”. Have your video ready, because around this time, your child will likely be close to formulating their first word!

It’s important to remember that every child is different. Just because your two-month-old baby isn’t making babbling sounds yet, don’t give up! You should continue engaging with them, sounding out words, and making sounds to facilitate their language development. If you feel something serious may be wrong, please share your concerns with your child’s pediatrician.

Is Goo Goo Gaga a word?

“Goo goo gaga” isn’t a real word, and you can chalk your baby’s use of these sounds to them reproducing the sounds they’ve heard while they’re putting together noises and trying to talk.

You may be wondering “where did goo goo gaga come from”? There is no real meaning, other than nonsensical baby chatter while trying to form real words and communicate with you! That’s the only goo goo ga ga real meaning.

Babbling can have a significant impact on how a child develops strong vocabulary and pronunciation. Over time, a child may even use their babbling to expand their vocabulary.

Your toddler may be influencing their own learning and vocabulary in ways you couldn’t have even imagined. According to a 2018 study in Developmental Science, infants are able to act as influencers and facilitate their own communication development through babbling. When an infant begins babbling, adults generally use a higher volume pitch and speak more slowly. This connection leads to greater language development and comprehension…all starting from your child’s direction!

Think of it this way: if your child is making noises like “ba boo” or “goo goo gaga” and pointing to a toy puppy or dog on TV, you may start correcting them by saying “dog”, “woof woof”, or making barking noises. They indicated to you that they wanted to discuss that thing they found, and you helped them understand what it was, how it made sounds, and how they should identify it with you in the future. Pretty cool, huh?

If you’re looking to encourage babbling from your child, the television may not be the answer. Babies respond best to slower conversation that accounts for their noises and responses, a true organic conversation. Because TV characters won’t account for responding to your child’s “oh” and “ah” sounds, keep up the conversations with your child! It’ll play a significant role in their babbling language development.

What to do if your baby isn’t babbling yet

Babbling is an important step in a child’s language development. If your baby isn’t babbling yet, or hasn’t attempted to babble at their appropriate age intervals, this can be one sign of potential clinical issues, such as hearing loss, speech delay, or a learning disability. 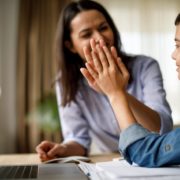 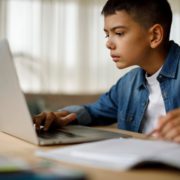 6 Tips on How to Improve Reading Comprehension in Your Child 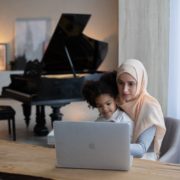 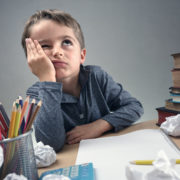 Does Your Child Have Expressive Language Disorder 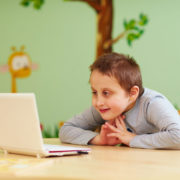 Learning to Self Regulate: Speech Therapy for Aspergers Syndrome 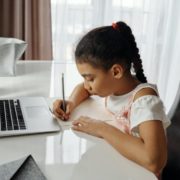 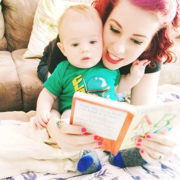 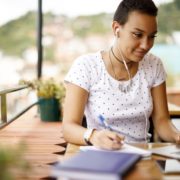 How Speech Therapy Can Help You with Successful Accent Modification

How Alzheimer’s Affects Your Speech
Scroll to top